While working on another project, I recently had an opportunity to consider ex parte communications between judges and parties or their representatives in China. While many in practice say that judges and lawyers frequently discuss cases out of court and away from the other party, the question of whether such contact is lawful proved to be less obvious. As China’s new judicial reforms emphasize the resolution of cases through in-court activities, this is one source of off record influence that has been rarely discussed.

Since 2001, the PRC Judges Law, has said that judges must not meet privately with parties and their agents, or accept their hospitality or gifts [article 32(12)]. The Chinese word used for ‘privately’ (私自) is ambiguous, however, and could be more accurately translated as ‘secretly’ or even ‘without authorization’, as a translation on the NPC’s own website reads.

The inclusion of the prohibition in the same article as bans on receiving gifts, taken together with the ambiguous Chinese and the NPC’s translation, makes clear that the restriction is primarily concerned with preventing bribery. Cracking down on judicial corruption is a perfectly legitimate goal, but it shows that the law does not necessarily agree that all ex parte meetings creates potential bias by giving one party access to the judge without the other party having an opportunity to respond. This means that under certain non-secret, authorized conditions, ex parte communications might be entirely permissible.

Many people point to a joint release by the Supreme People’s Court and Ministry of Justice from 2004 on standardizing interaction between lawyers and judges in the interest of maintaining judicial fairness, as a landmark for banning ex parte contact.

Article 3 of that release reads:

Article 3: Judges must not secretly meet unilaterally [ex parte] with a party or their retained lawyer.

Lawyers must not meet unilaterally [ex parte] with judges in violation of rules. [emphasis added]

Unfortunately, the ambiguous ‘私自’ [privately/secretly/without authorization] is still there. Moreover, the addition of the unambiguous ‘单方’ [unilaterally], could actually be taken to show that 私自 by itself means some impropriety beyond a private meeting; otherwise including both would be superfluous. 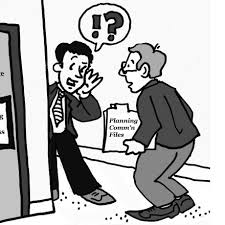 In 2005, Guangdong courts began to answer some of these questions as they experimented with systems for parties requesting appointments with judges [约见法官制度] . Put forward as a means of increasing transparency and fairness by standardizing interactions between parties and judges, these new systems made little mention of the 2004 SPC/MOJ provisions.

Rather than attempting to stop ex parte communications, appointment systems were praised as a way of giving all parties equal access to judges while ensuring that a record of such meetings would be kept to protect against improprieties. Stopping judicial corruption was again put forward as the main focus. Interestingly, because they gave clients and lawyers equal ability to make appointments, one of their functions was also said to be preventing lawyers from drumming up business by flaunting special access to judge.

The Guangdong High Court’s provisional rules are typical of those adopted by lower courts in Guangdong. First, the Provisions make clear that they apply to parties and their representatives meeting judges regarding civil, criminal or administrative cases currently before the court, or ongoing enforcement actions. Second, they provide a limited number of situations in which meetings with judges can be requested:

Assuming the appointment request falls within one of the above categories, including the expansive final category, a meeting is generally be set up for that same day, or an explanation given for why it was refused.

A number of measures are taken to ensure that the meetings leave a paper trail: The party submits the written application to the court’s case-filing division (sometimes a litigation service center or petitions office) rather than to the judges themselves, the meeting must occur in a designated location in the court, and records are to be kept of the meeting by a clerk. Whether these records are included in the case file for the other party to see, however, or are strictly for the internal disciplinary purpose of preventing corruption, is unclear.

While such rules make it difficult for a judge to ignore a party or their representative that feels there is a pressing need for a meeting, they are unlikely to prevent improper meetings. Anyone determined to have a truly secret meeting, solicit or give bribes, is unlikely to go through the formal application process. What the rules do accomplish is a leveling of the playing field, making sure that all litigants have access to the judge, regardless of status and connections.

That this may have been an intended goal is further evidenced in a 2011 version of these provisions from the Bao’An Distict Court in Shenzhen, which provides that when it is the judge that needs to meet with parties, they may arrange the meeting themselves, avoiding many of the protections in the appointment system. [Article 14]. The rules then primarily serve to ensure that parties have a right to compel an audience with the judge when they have a need.

In Jinan, Shandong, rules adopted on the interaction of lawyers and judges in 2014, simply provide that meetings keep a record, be held in designated locations, and be attended by additional court personnel. They expressly refer to the 2004 SPC document as forbidding judges to meet alone with parties, but sees the concern as one of preventing corruption or the appearance of corruption, resolved by the presence of additional court personnel. For the reasons mentioned above, it is difficult to imagine this will have much actual impact on stopping judicial corruption， but the rules do require noting the content of the meeting in the case file, presumably available to the other party.

What is apparent from these regional rules is that not all ex parte communication with judges is prohibited, even where a judge or party is seeking to resolve the case outside of court. It is also clear that the concern in preventing and standardizing such meetings has not been a procedural concern that decisions should be made in an open forum where all parties are represented and able to respond to evidence. That concern, however, is central to the 4th Plenum reform of making courtroom proceedings the focus of trial.

Existing systems for meeting judges in Guangdong, Jinan, and elsewhere that emphasize access to the court and fighting corruption, could easily modified to put such concerns to rest. When a meeting with a judge is requested, it can be arranged under conditions similar to those already required, but require that the other part be given an opportunity to attend and respond, or at least be given notice that the meeting occurred. Where the issue is simply one of new evidence being found, or the need for immediate protections, a written motion distributed to all parties would likely suffice until an open hearing can be held.