Last week, China announced rules for the creation of a national sex offender database. Use of the database, however, is strictly limited to inquiries regarding teachers and other school employees made by the schools and teacher accreditation bodies.

The registry is being hailed as a powerful tool for protecting children, but because it also imposes a new punishment, a restriction on offenders working in schools, it also raises issues of fairness and criminal procedure that should be watched carefully.

The database is the collaborative product of 3 ministries: 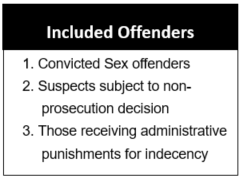 The first of these groups is suspects that the police and prosecutors believed to have committed sex crimes, but decided to drop the case because the alleged offense was so mild that punishment was viewed as unnecessary. This means that the evidence against the suspect was never evaluated or debated at court, and they were never convicted and sentenced, meaning that the restriction on their working in schools is an extra-judicial punishment.

The second group is those who received an administrative penalty for indecency. Under China’s Public Security Administration Penalties Law, up to 15 days in jail is authorized for lesser violations that fall short of the criteria for criminal punishment. Many minor offenses, such as drug possession or drunken brawling, which are criminalized in other countries, are addressed exclusively as administrative violations in China. People receiving administrative punishments do not have the right to an attorney or a court trial, making the system- and any resulting employment restrictions- extra-judicial as well.

The consequence of being in the registry are the same regardless of which group they belong to: ineligibility for employment as a teacher (or immediate termination) and disqualification for (or forfeiture of) teaching credentials.

Sexual harassment that does not constitute a crime or violation is not included in the database. The new rules do expressly mention, however, that special rules are forthcoming on the eligibility of those who were previously fired for harassment to teach or work elsewhere in other schools.

Inquiries are to be made by schools planning on new hires and accreditation bodies reviewing applications for teaching credentials. The MPS is to report back either that there is no relevant information, or by giving the type of offense recorded in the database.

Primary and secondary schools (K-12) are obligated to make inquiries, but colleges and independent training centers for children may also ‘refer to these rules’ in practice, suggesting they may also make inquiries.

While the rules say that only information recorded in the system at the time of the inquiry is to be reflected in the response, no clear time frame for removal of information on either criminal or administrative violations is given. It is possible this limitation refers to the exclusion of sealed juvenile criminal records, which is expressly provided for elsewhere, but it may simply clarify that the police obligation is only to search the database, rather than actively investigating further or editorializing in the response.

The subjects of inquiries are allowed to object, and are entitled to an administrative re-examination of the case when they do so.

While the SPP’s function in the system is one of oversight to ensure that the system is properly implemented, little is said as to what this will look like. The rules provide that those responsible for failure to make required inquiries will be held responsible, but the rules have no specifics or even references to specific laws- meaning it will likely be handled as any other failure to perform official functions.

About Jeremy Daum 114 Articles
Jeremy Daum is a Senior Fellow of the Yale Law School Paul Tsai China Center, based in Beijing, with over a decade of experience working in China on collaborative legal reform projects. His principal research focus is criminal procedure law, with a particular emphasis on protections of vulnerable populations such as juveniles and the mentally ill in the criminal justice system, and is also an authority on China’s ‘Social Credit System’. Jeremy has spoken about these issues at universities throughout China and in the U.S.; and has co-authored a book on U.S. Capital Punishment Jurisprudence for Chinese readers. He is also the founder and contributing editor of the collaborative translation and commentary site Chinalawtranslate.com, dedicated to improving mutual understanding between legal professionals in China and abroad. He translates, writes, edits, does web-design, graphic design, billing, tech support, and social media outreach for China Law Translate.
Facebook Twitter