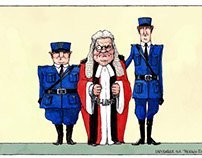 To the High People's Courts and people's procuratorates of all provinces, autonomous regions, and directly-governed municipalities, the branch court for the Xinjiang Uighur autonomous region Production and Construction Corps , and the Xinjiang Production and Construction Corps people's procuratorate:
these "Opinions on the Establishment of a Disciplinary and Punishment System for Judges and Procurators (for trial implementation)" are hereby released to you; please fully implement them in consideration of actual conditions. Please promptly report any problems and suggestions in implementation to the Supreme People's Court, Supreme People's Procuratorate.

The disciplinary committee is to be comprised of personnel with high political character, strong professional capacity, and good professional integrity; including representatives from people's congresses deputies, political consultative conferences, legal scholars, lawyers, and judges and procurators. Judge or procurator representatives must not be less than 50% of the entire committee, and should be selected from among different levels of people's court and people's procuratorates within that jurisdiction.

5. The duties of the Disciplinary Committees:
(1) Draft and revise Disciplinary Committee Charters;
(2) On the basis of the investigation of people's courts and people's procuratorates, follow procedures to review and determine whether judges and procurators have violated their adjudication or inspection duties, and issue an opinion on whether it constitutes intentional violation of duties, whether there is gross negligence, whether there is ordinary negligence, or whether there is no violation of duties;
(3) Accept judges' and procurators' objections to the review opinion and make decisions;
(4) Deliberate and decide other relevant matters in efforts to discipline and punish judges and procurators.

The disciplinary committee does not directly accept reports and complaints about judges and procurators. If reports or complaint materials about judges or procurators are received, they shall be transferred to the relevant departments for handling in accordance with provisions, on the bases of the cope of authority for acceptance.

6. Where, in the course of judicial administration, litigation supervision, and judicial supervision, people's courts or people's procuratorates discover that judges or procurators have conduct suspected of violating adjudication or inspection duties, and it is necessary to determine whether it constitutes intentional or gross negligence; it shall be sent to the disciplinary committee for review on the basis of the verified facts.

7. When the disciplinary committe reviews disciplinary matters, the relevant people's courts or people's procuratorates shall provide the facts and evidence related to the violation of adjudication or inspection duties by the accused judge or procurator, and present evidence on their acts of violating adjudication or inspection duties and their subjective fault. The accused judge or prosecutor has the right to make statements, present evidence, and make a defense.

8. Through review, the disciplinary committee shall, on the basis of facts, circumstances, and relevant provisions, and upon passage by a 2/3 majority, issue a review opinion that the accused judge or procurator has committed an intentional violation of duties, has gross negligence, has ordinary negligence, or has not violated duties.

The judges or procurators disciplinary committee shall conduct a review of the objection and its grounds, make a decision,and respond to the accused judge, procurator, or relevant people's court or people's procuratorate.

10. Where the judge's or procurator's conduct in violation of of adjudication or inspection duties proves true, and the disciplinary committee finds that it constituted intent or gross negligence leading to a case mistake causing serious consequences, the people's court or people's procuratorate shall follow relevant provisions to make a disciplinary provision decision, and give a corresponding disposition.

(1) Where punishments such as suspension, delayed promotions, removal from a position, ordering resignation, or dismissal shall be given, it is lawfully handled in accordance with the scope of authority and procedures for management of cadres;
(2) Where disciplinary sanctions (记录处分) shall be given, it is handled in accordance with the relevant provisions and procedures.

Where judges or procurators conduct in violation of adjudication or inspection duties involves a crime, the leads on the illegality are to be transferred to the relevant judicial organ for handling.
Removal a judge or prosecutor from duty shall follow legally prescribed procedures to request for a decision by the Standing Committee of a People’s Congress.

12. Judge and Procurator as used in these Opinions refers to judges and procurators after the implementation of the personnel ratio system
Pursuit of the responsibility of judicial support personnel is handled in accordance with the relevant laws and the relevant provisions of people's courts and people's procuratorates.

13. On the basis of this opinion together with actual conditions, the Supreme People's Court and Supreme People's Procuratorate are to respectively draft working measures for disciplinary punishment measures against Judges and prosecutors.

Published in SPC and SPP