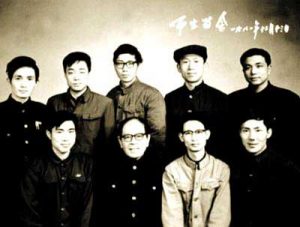 This classmate of his is Li Keqiang. During this year's Liang Hui, at his first press conference in his new role as Premier, when responding to an Associated Press reporter's question about hacker attacks, Li said, "It feels as if there's a presumption of guilt. I hope that both sides will do less baseless mutual finger-pointing, and do more to protect internet security." Behind these words, his deep understanding of legality is on display.

Normally, Li Keqian's background as a PhD in economics overshadows his bachelors level legal studies, "but legal concept have already become part of his heart and mind, and play a major role at critical junctures," explains Jiang Ming'an.

Today, in the Party Committees and Governments of the 31 interior provinces, directly-governed municipalities and autonomous regions, over 75% of principal personnel have education in the humanities or social sciences. Of these, officials with an educational background in law, have slowly emerged and gradually formed a key group.

PKU law school professor, Jiang Ming'an feels that more and more leaders having a background in law is beneficial to raising the level of legal thinking among the entire corps of officials. A large number of politicians, especially national leaders, having an education or professional background in law is one sign that 'governance according to law' is progressing.

After the series of changes that occurred at the Liang Hui, more and more officials emerging from the law schools have surged to the levels of China's senior officials. Premier of the State Council, Li Keqiang has a PKU bachelor's in law and PhD in economics, Zhou Qian, the Chief Justice of the Supreme People's Court graduated with a masters in law, majoring in Civil Law, from Southwest University of Politics and Law (SWUPL) ; Xia Yong, who newly assumes the position of Deputy Director of the State Council Office of Legal Affairs was formerly director of the national state secrets department and is also a graduate of SWUPL.

In truth, SWUPL has trained a wave of political officials, with a long list of names: Central Disciplinary Committee Secretary Dong Wenqing, Ministry of State Security Deputy Directory, Majian, Deputy Director of the Office for the Leading Small Group on Efforts to Maintain Social Stability Xia Chenghua, ACFTU Vice-Chaiman Zhang Mingqi, and the moderator of this year's Liang Hui news conference, Secretary General of the NPC Standing Committee Li Lianning are all graduates of the SWUPL law department.

Jiang Ming'an is please to see an increasing number of officials with legal training enter Senior officialdom. He feel 'this will greatly propel' progress towards 'governance by law'. Of course, just because there are a few leaders with legal training doesn't mean that all problems can be resolved." Jiang Ming'an says that, as always, the implementation of policies depends upon the local governments at the provincial, municipal, county and village levels. If the high levels are conscious of rule of law, but the lower levels don't follow their policies in their work, that's no good either.

According to the reporter's incomplete statistics, the number of local government officials with a law educational background has shown an upward tendency, of 400 current provincial standing committee members, 19 have come from the law schools; by contrast, at the administration change in 2008, only 11 provincial standing committee members had come from the law schools.

On a ranking of colleges by graduation of outstanding politicians released by China's version of classmates.com, China University of Politics and Law, South Central University of Finance and Economics, Southwest University of Politics and Law and other schools specializing in law tended to rank towards the top. The 'outstanding politicians' refers to national level leadership, national level deputies, provincial level primary leadership, and Central Committee members or candidates from the 14th, 15th, 16th, 17th or 18th Committee. One can see the increased number of legal professionals at the higher levels.

The Central Party School Teaching and Research department professor, Cai Xia, expressed his expectations for leaders with legal training: We can predict that reform and innovation practice will begin to fall more within the scope of the legal system, and not political requests. In the past politics has served in place of rule of law, but if people with legal training assume the leadership, they will be concerned with whether reforms and innovations are compatable with the rules and requirements of developement, and whether or not it is inconsistent with existing law.

The Rule of Law Spirit

State Council Premier, Li Keqiang emphasized at a press conference that "We will be faithful to the Constitution, loyal to the people, and govern according to the people's will." "We will put law in a sacred place, no matter who a person is, or what he is doing, he cannot go beyond the limits of the law.

In the new leaderships speeches, the Constitution and law are repeatedly brought up, this is a way of announcing and promising the duties, governance and administration will be performed under law.

In Jiang Ming'an's analysis, the central leadership's recent speeched emphasize the special importance of the Consitution, sending a strong signal for holding power under law, and under the Constitution. The most important function of the constitution is limiting public power and securing human rights, officials with a legal background have a hope of changing local officials past thinking of only the GDP; years of rule of law thought will be assisted by their increased consideration of social fairness, justice and human rights, and these will become the bedrock of a country under the rule of law.

Newly seated Supreme People's Court Chief Justice Zhou Qiang is a model for governance by jurists, and is also the object of high hopes. That Zhou Qiang has a Masters in Law from SWUPL, that he has become the 10th Chief Justice of the SPC, and his time as leader of Hunan are inextricably linked.

In 2010, Zhou Qiang served as the Secretary of the Hunan Provincial Party Committee, further advancing the platform of 'Hunan under Rule of Law", and in the following September the Hunan Provincial Party Committee passed "the outline for establishing Hunan under the Rule of Law". Zhou Qiang said, "through the perfection of rule of law, we will promote the systematization, regulation and proceduralization of the people's democracy, and, on the path of rule of law, expand citizen's orderly participation in politics.

Jiang Ming'an explains 'Legal awareness has always permeated his governance. When jurists enter politics, their many years of legal thinking are useful to their increased consideration of social fairness, justice and human rights; to considering protection against the abuse of public power and the protection of citizen's human rights, to considering the legality of implementing policies; and these are all essential to the a nation under the rule of law. I believe that as he takes up the leadership of the SPC, he will again do the same."

"When persons with an educational background in law assume leadership posts, particularly high level leadership posts, the greatest advantage is that they understand the importance of systems, and the the legal spirit has already been internalized, " said Central Party School Assistant Professor of Law and Politics, Liu Suhua.

But one employee of the Chaoyang procuratorate had a different opinion. He feels that with China currently mid-march towards the rule of law, how to establish and improve the system is more important than whether or not we have officials with a legal background governing. "True Rule of law should mean that no matter who is governing, the nation can operate within the framework of law." This procurator is from China University of Political Science and Law; Shaanxi Provincial Party Committee Secretary Yuan Chunqing, and Guanxi Autonomous region United Front Director, Fan Xiaoli, are his elder classmates.