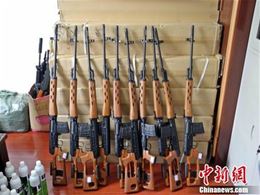 The case of a teenaged gun enthusiast from Southern China who was given a life sentence for buying replica guns has gone viral on the Chinese and English language internet.

Dawei Liu was charged with gun smuggling when 20 of the 24 replica guns he ordered from Taiwan were determined to be real weapons. While the guns are indeed replicas, they are capable of firing projectiles with sufficient speed to qualify as prohibited firearms under China’s laws.

Given the number of weapons involved, the judge sentenced Dawei to a life sentence [indefinite detention] , saying that even the death penalty might be appropriate, but choosing a life sentence in recognition of Dawei’s youth. Discussion of the case has put a spotlight on standards for evaluating firearms that many feel result in ‘real punishment for fake guns.” At the close of his trial, Dawei is said to have shouted ” Use the guns I bought to execute me, if I die I’ll admit my guilt”

This was in April 2015, months before revisions to China’s Criminal Law. The revisions make no changes to the firearm standards, which are set elsewhere, but they did abolish the death penalty for gun smuggling offenses, as well as a number of other offenses. You would never know this from the media coverage of Dawei’s case. The Procuratorate Daily , the official publication of China’s Prosecutors, and the People’s Daily’s English coverage, both quote the unammended version, still allowing for the death penalty, without any qualifications or mention of the change; a jarring oversight for those aware of the amendment.

In there defense, the sentence came down months before the Amendment took effect, and the trial would have applied the previous version of the law that is quoted in the article. Moreover, the death penalty was not given, so it may have seemed like only a side issue — although clearly worth mentioning in an article on legal reform.

While the life sentence is still a permissible punishment following the revisions to the criminal law, it is clear that the judge meant to mitigate the Dawei’s punishment in light of his youth, but Dawei has been sentenced to the most extreme punishment now available for this offense. Dawei’s case is now up for appeal, which explains the belated surge of interest, and it will be interesting to see if the decreased sentence range has any impact on the second-instance trial.

The pending appeal and mentions of the outdated law in the current reporting does raise questions about retroactivity in China’s law. Generally, when a trial is still pending, China follows the principle that changes in favor of the defendant will be applied, but that it would be unjust to sentence someone, or increase the punishment, where the defendant would not have had notice at the time of the offense [See eg Crminal Law article 12].

Whether any of this will impact Dawei’s case is questionable, as the issue seems to be phrased around the toy gun standards, but as China’s law continues to reform, the need to fully consider complex issues of retroactivity will be more and more relevant. More on point, the need for clear legal education and reporting, of both judicial officials and citizens, is key to building confidence in the legal system. The Procuratorate has recognized the value of using cases to teach the law, but the Procuratorate Daily coverage shows there is still room for improvement.