China’s new Civil Code is the country’s first national law to expressly oblige companies to adopt anti-sexual harassment policies. It is a big and welcome step that will encourage employers to take dealing with sexual harassment seriously, in part by opening them up to litigation. However, the Code’s provisions and subsequent authoritative commentary at a State Council press briefing by Vice President of the Chinese Law Society, Prof. Wang Liming, who participated in the Code’s drafting, indicate that employee lawsuits will need to meet narrow criteria to be successful. These requirements will preclude or disincentivize many survivors of sexual harassment from suing, and, consequently, greatly diminish the impetus for companies to act. 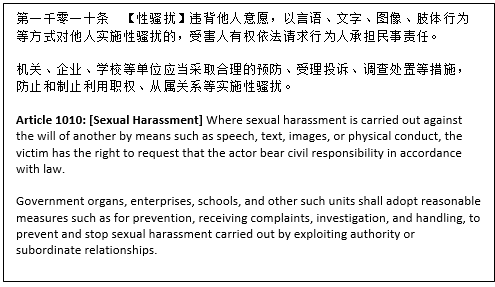 The provision of the Civil Code that addresses sexual harassment, Article 1010, has two components. The first defines sexual harassment, and stipulates that perpetrators may be held civilly liable as individuals. The second states that organizations such as government bodies, enterprises, and schools have an obligation to adopt anti-harassment measures. In light of the language of the Article 1010 and Prof. Wang’s interpretative comments, both components of the provision present barriers to successful litigation. Below are three key limiting criteria:

At the State Council press briefing, Prof. Wang explained that the behavior in question:

This requirement would leave many forms of sexual harassment not covered by the law. For example, repeatedly telling discomforting dirty jokes, pressuring employees into sexually risqué performances for company parties, or openly displaying pornography in the office would not count as harassment. It seems to give a pass to employers that tolerate a hostile work environment as long as the sexual harassment is broad rather than targeted.

Prof. Wang’s brief comments on consent also indicate that plaintiffs may have a high bar to clear in proving that the behavior occurred against their will. He stated, the behavior “must be against the victim’s will, not in accord with their interests, completely disapproved by them, opposed by them, [they] feel disgusted.” This could open the door to dubious arguments that the plaintiff failing to clearly and vigorously express their opposition to the harassment amounts to having given their consent. Not only does silence not constitute consent, it is common for employees to quietly endure mistreatment out of fear that speaking up could hurt their career.

2) There must be a top-down power relationship

The second component of Article 1010 only obliges employers to adopt measures that address harassment that occurs between people in vertical power relationships. It states that organizations:

“shall adopt reasonable measures for prevention, receiving complaints, investigation, and handling, to prevent and stop sexual harassment carried out by exploiting authority or subordinate relationships.”

Under this provision, it appears employers would not be responsible for responding to a situation where an employee makes regular unwanted sexual advances towards another as long as they do not hold a position of authority over them.

3) Must show lack of employer policy “caused” the harassment

The biggest barrier to finding employer liability is the causal requirement raised by Prof. Wang at the State Council press briefing. Prof. Wang explained that a survivor of sexual harassment cannot sue their employer merely for failing to have adopted anti-harassment policies. In addition, there must be a:

“cause and effect relationship between the organizations’ negligence [i.e., failure to adopt policies] and the harm . . . . Even if a mechanism for filing complaints was not established, but it can’t be said this played a role in causing the harm to happen, then this cannot be relied upon to find compensatory liability.”

This requirement puts the plaintiff in the near-impossible position of having to prove that the absence of a policy contributed to causing the harassment to happen. It is hard to fathom what evidence a plaintiff could provide on this point that would not be mere conjecture. If a plaintiff cannot meet this burden, a company—even if it flouts its obligation under the Civil Code—can avoid civil liability. 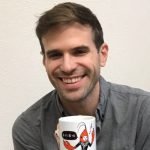